"In the summer of 1894, Mr. and Mrs. Loveland came to make their home in Lodi, Mr. Loveland to be the principal of our schools. As they became acquainted in the village, they were impressed with the capabilities of the Lodi women, their desire to study, and their interest in world affairs. It was about this time that Women's clubs were being organized throughout the United States and it seemed certain that a club in Lodi would be successful and it was largely through Mrs. Loveland's efforts that this came to pass."

The Lodi Woman's Club was founded then in November 1894, to meet a goal of mental stimulation and social relaxation. To achieve their study, lessons, and lectures the women purchased books and magazines.

"Then the missionary spirit took hold of them and they wanted to do something for Lodi and its people, and out of this desire our Library was born."

*Quotes from "The Story of the Lodi Woman's Club and the Woman's Club Free Library" by Grace Irwin Brainerd, November 1947

The library was kept in various homes until the high school principal made a home for them in the school library.

Later, a corner of George Perry's music store was rented for the library collection, and then it was moved to Bert Richmond's variety store on South Main Street.

A library inside City Hall

In June 1904, the Woman's Club petitioned the Village of Lodi to make accommodations for a library in the City Hall construction they were contemplating. City Hall was built at 113 South Main Street in 1914 and - thanks to the Woman's Club - it did include space in the front part of the building for the library.

In February 1946, the Woman's Club again petitioned the City of Lodi - this time for more room; the Fire Department was planning to move, and the women requested that space for library expansion. This expansion spread the library facilities across two stories inside City Hall. 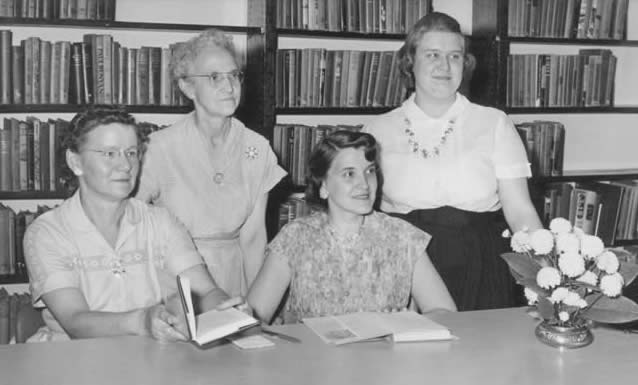 When City Hall was damaged by fire on July 7, 1960, the library temporarily moved to the old post office at 119 Lodi Street for a nine-month period during remodeling.

The 1970s brought library systems to Wisconsin, and it wasn't an easy transition. It took two committees and until 1979 for Lodi and the other seven libraries in Columbia County to join the South Central Library System.

A library building of our own

A planning process began in 1984 to research the future of the library's needs. Eventually, in March of 1988, the library board and the Common Council decided to purchase and remodel the building being vacated by the State Bank of Lodi at 130 Lodi Street. The library moved into that building on March 5, 1990 and is still housed there.

With the change in venue, the board also altered the library's name: we became the Lodi Woman's Club Public Library in the fall of 1989 to reflect compliance with state statutes regarding public libraries.